Do you smell something ? Give it the "Sniff test".

Smoke ? Fire ? I don't smell anything...!
Nickel Mountain Stampede
Somethings just won't pass the “Sniff Test”. Like the fridge after two weeks of bachelor life, or the bait you forgot to take out of the boat that last time you loaded it on the trailer, or the hard boiled eggs I forgot were in my backpack last hunting season. Nope, one whiff and you KNOW something is there.

In larger world, somethings never change. This week I caught a whiff of something reminiscent of Jacuie McNish's “The Big Score”, Robert Friedland and The Voisey Bay Hustle. 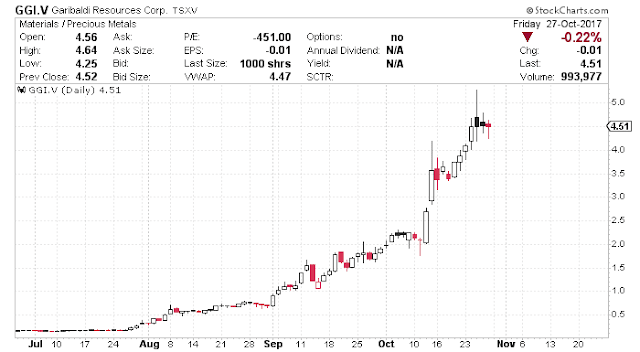 Now I am going to re-read it to compare The Voisey Bay Hustle to the unfolding saga of
Garibaldi Resources “Nickle Mountain” in Northern British Columbia.
This, lacking a better title, I call the Nickle Mountain Stampede. Back in the day of the Klondike or the Cariboo, stampede was used to describe the move of men and animals (maybe a few ladies as well) to the newly discovered fields of wealth of the West first, then the North. People of all manner and means gravitated to the goldfields to find mintable wealth on the surface of the earth in a scramble for a good claim. You know the rest.
In my work as a Technical Analyst, repeat appearances on my “Scanned Lists” often leave me impressions of stocks that show up high but never quite make the final selection.
Throughout the Spring and early Summer of 2017 Garibaldi Resources was one, and I was a bit intrigued by it, until it began giving off vibrations that trigger some “bottom finding” scans, in June of 2017. As I monitored for seasonal turnpoints, I recommended GGI.V(Garibaldi) as “sleeper” in June 2017 of unknown potential, as a low priced Junior explorer/developer under 20 cents, for nothing more than its technical market action. The rest is history ! ? NOT YET !
Let me spare you the details. If you want them, just Google any number of the locales listed in the various press and news releases from the companies involved. Like a dropped stitch in a sweater, they will unravel and lead you to Terabytes of info. Bottom line in one word ? METALS. Base + Precious+etc. Lots of them. Is this going to be a stampede ?
Yes, but but not for those without a lot of cash (or credit). Why am I bothering with this?

If you read about the resource sector, I think you will recognize the names that will show up here in the endgame. Until then, I don't think they matter. For now what matters and what has hinted and clued me as to the potential struggle to control this particular discovery is the pull-back of data, the deletion of information from public information releases, and the hints and clues contained in previous releases. Ah yes theory ( conspiracy, no doubt) accompanied by verification (chart on P.1). Those who know are voting with their dollars. Those of us who suspect, also voting with our dollars (includes me). Add to that the people put on the project, and those taken off. Later we will see who got what. After the deal is made.
For those of you who remember the Aurelium deal where investors were shut down then shut out it in rather abrupt fashion, I am trying to recall the CEO's name, but does not come to mind yet. He went on to CEO a Brazilian firm but I haven't seen much of him since, but am the lookout for he or those of his ilk, brought in, if such is to be the case, to sew up the deal before this stock appreciates out of sight, to be acquired by another. Sounds crazy doesn't it ? And you and I know it is sorta crazy but just what happens, especially to those either too slow, or too deep in disbelief or denial.
What I KNOW is here is in plain sight, whether its the subject matter experts brought on board, from the Voisey Bay Era, or the retracted press releases, or the new de-emphasis on this discovery, it feels like a fire-hose is being turned on an emerging magma stream, which cannot be stopped, but is gathering containment efforts until re-enforcement arrive. Who might they be? Well I don't think Eric Sprott is who is in the reinforcements, but might he be the camel's nose under the tent? I have not made up my mind, but I know he is early at getting a fistful of stock of the two major players here, Garibaldi (GGI.V) and Metallis (MTS.V).
l
This need not be THEIR dirty little secret, trying to stealthily acquire the company on the cheap before the public gets wind of the developments. I figure sunshine is good for everyone. Execute your own Due Diligence Investigation, rather than taking my word for it.
For me these stocks remain on my radar. For any more info you can follow me on twitter, as


“denaliguide@twitter.com”
Posted by Denaliguide at 10:18 AM

What people say about DGS

During the period Feb 1/17 to May 31/17, with the assistance of Denali Guide, trading primarily in ETFs using his “Golden Mean” I was able to increase my portfolio by 9.1% over the four month period. In addition I found him to be most helpful and forthcoming about his methodologies and the reasoning behind them.

Catch the turns in the Precious Metals ETFs !! WEEKLY UPDATES, Signals by Email. First Month refundable if not satisfied, no subscription risk to you. Complimentary Subscription to PEAK PICKS included as well $ 49.95 US